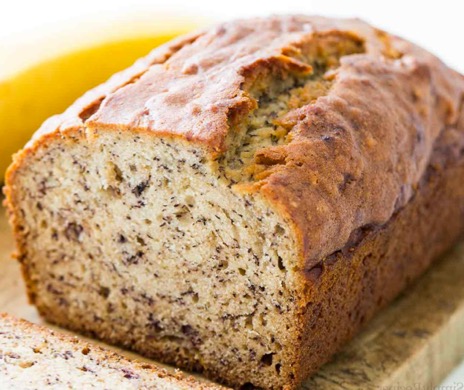 Banana bread is a type of bread made from mashed bananas.It is often a moist, sweet, cake-like quick bread; however there are some banana bread recipes that are traditional-style raised breads.
Banana bread first became a standard feature of American cookbooks with the popularization of baking soda and baking powder in the 1930s. It appeared in Pillsbury’s 1933 Balanced Recipes cookbook, and later gained more acceptance with the release of the original Chiquita Banana’s Recipe Book in 1950.
National Banana Bread day is February 23.

Even if bananas appeared in the US in the 1870s, some food historians believe it was a byproduct of the Great Depression as resourceful housewives did not wish to throw away overripe bananas. Others believe the modern banana bread was developed in corporate kitchens to promote baking soda products.